Category: Process
Author: Campbell Law
ABSTRACT
This document proposes the voting protocol for the RARI DAO outlined in “RRC-0: Introducing the RARI Foundation and Fully On-Chain Governance for RARI DAO - Process” based on a holder’s locked $RARI (“veRARI”). This document should be reviewed and considered in conjunction with RRC-0, which has been simultaneously posted at Snapshot

MOTIVATION
The main motivation behind this proposal is to create the voting infrastructure for the community to participate in the decision-making of the RARI DAO, the governing body of the RARI Foundation. The core objectives for the proposed voting system, in alignment with the RARI Foundation’s guiding values, are:

The proposed veRARI (vote-escrowed $RARI) model is based on the notion that long-term aligned participants are willing to exchange short-term liquidity for enhanced privileges within the RARI DAO, which primarily include, but are not limited to, voting rights. This model encourages long-term oriented decision-making rather than the pursuit of individual short-term interests.
RATIONALE
As the RARI ecosystem evolves and expands, a well-defined proposal and voting system is required to gather new community ideas and provide a clear path for these ideas to be approved and implemented.

The RRC Process as detailed in RRC-0 needs an accompanying consensus mechanism. It must be fair, transparent and automated. Balancing each of these requirements is challenging: on-chain solutions make it costly to vote; off-chain solutions are less expensive, but require actions to happen outside of the platform.

This proposal outlines a voting protocol and system based on veRARI that seeks to balance the pros and cons of various voting approaches, and to hold up the RARI Foundation’s core guiding values of autonomy, efficiency and accountability, and long-term sustainability. The voting protocol based on veRARI can be found below in the following SPECIFICATIONS section.
KEY TERMS

Lock Amount – number of $RARI subject to a Lock.

Release Schedule – a schedule according to which locked $RARI are released over time.

Slope Period – a period in a Release Schedule during which locked $RARI are linearly released in accordance to the Release Cadence.

Slope – rate at which locked $RARI is released during the Slope Period in accordance to the Release Cadence.

Timelock – smart contract where, for the duration of the Cooldown Period, Accepted RRCs are queued for implementation and execution. The RARI Foundation’s Board will have the power to veto Accepted RRCs in the Timelock only for the specifically enumerated reasons in RRC-0.

SPECIFICATIONS
Assuming the approval of RRC-0:
Introducing veRARI
Vote-Escrowed $RARI (“veRARI”) is an extension and modification of a similar concept originally introduced by Curve DAO. The main distinction in the case of veRARI is the introduction of a Cliff Period, which serves as a period of “hard-locking” during which no locked $RARI is released.

In short, veRARI is received proportionally to the Lock Amount and the duration of such Lock, and is reduced as locked $RARI are released.

Any $RARI holder can create a Lock specifying following parameters:

Upon creation of a Lock, a Release Schedule will be initiated.

See the illustrative examples below depicting three different types of Locks that are possible to create based on the parameters submitted.

The following initial parameters of the system are proposed to be set:

The voting power of an individual Lock is dynamic and directly corresponds to the Release Schedule.

Below is the initial veRARI balance formula:

A user’s overall initial veRARI balance will be 20% to 140% of the Lock Amount:

Full Implementation is below:

Interfaces for smart contracts used by Rarible. Contribute to rarible/protocol-contracts development by creating an account on GitHub.

Main components of the governance system:

The illustration below depicts how different parts of the governance model interact with each other: 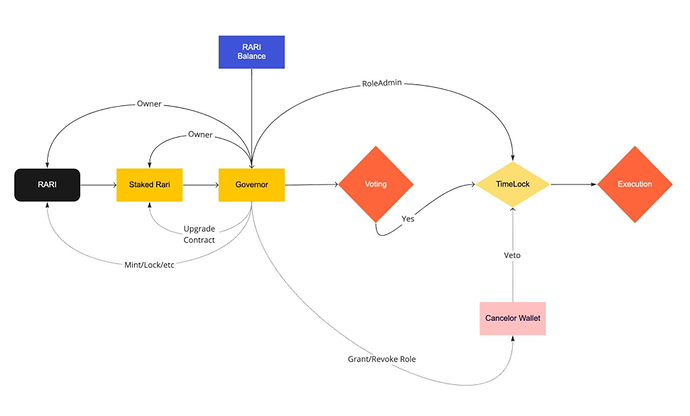 Contingent upon approval of RRC-0 and RRC-1, this Governance Model will be used for all proposals starting from RRC-2.

STEPS TO IMPLEMENT
Solution is implemented:

TIMELINE
Solution prepared and ready to be ratified

OVERALL COST
No cost to implement